Sota Turntables has always been known for suspension turntables that are capable of performing in environments that are not friendly to most turntables.  In the past Sota did make speakers for a short stint as well as a phonostage.  We get a lot of first time turntable people that need phonostages and we have always made suggestions that are decent for the entry level price.  These options were always units that would be ok for a while at entry level but would require upgrading later if a low output cartridge was chosen, or if more detail extraction was the goal.

In 2018  we made a first phono stage with Bill Carlin of Phoenix Engineering that was fantastic, but was not ready for production.  Bill suggested we work with Wyn Palmer if we could convince him to work on a design because he is the guru of high feedback phonostages and has proven designs.  Bill made the introduction in 2020 to Sota and after some discussion/coercion Wyn  agreed that he would indeed help us with a Wyn Palmer designed phonostage.

The design intent was set as a sub $500.00 unit that would compete with phonostages up to $1500.00.  The Sota unit that Wyn agreed to design was intended to be ultra low distortion, very low noise, and with a very flat RIAA curve response. It would also be easy to manufacture and produce, and would be suitable for both MC and MM cartridges.  Now this sounds simple in theory and everyone states their opinion is that their phonostage is better because of this or that.  However, designers have a different view from marketing and I love to get design projects working with people that view the obvious from a different perspective.

Wyn brought a lifetime of design concept not only from theory, but from listening as an avid audiophile himself.  Bill listens to vinyl only and loves the world of audio from a very personal perspective as he builds every device in his system.  To bring these two minds together and let me view Wyn and Bill’s design work from start to finish was an incredible experience for me.  Viewing the ongoing design discussions helped me to understand one key thing that has been my greatest learning from this project.

Having a flat RIAA curve and ultra low distortion phonostage in actual production (that is qualified at the end of the design) allows me to understand what other components are doing rather than having to change out cartridges to try and get rid of a bloat or glare that is occurring in the sonics.  To know that the phonostage is doing what it is supposed to do without adding a smear in some sonic register lets me relax to another level and enjoy what is on the album.  I can’t tell you how many mistakes I’ve made over the course of 20-30 years thinking that whatever was bothering me was my speakers, preamplifier, amplifier, cables, or cartridge when now I can easily hear that it was my phonostage adding, taking away, or adding smear to the soundstage.

We tested this against many phonostages that cost $150.00-$24,000.00 within a variety of environments with as many types of equipment as possible.  The Pyxi phonostage (named for its size), rose through the ranks and the amount of clarity that was brought to every test was apparent.  This is due to the fact that Wyn is a stickler for what he coins “total neutrality”.

We all hear the term “it’s so quiet”, but when you experience what Wyn designed as “total neutrality” it’s amazing to experience.

When we tested in public at some events we would lie and say it was a 2-3 thousand dollar phonostage so people would not judge the Pyxi as a “cheap” device and then couldn’t possibly compete with the phonostage they were comparing against.   At Capital Audio Fest many people sat down in our room and listened to entire sides of albums and would come back to just listen.  Ultra low distortion/total neutrality does not mean difficult to listen to, or harsh in any way.  It means the signal is not being added to with any distortion that then comes through the sound chain after the phonostage.

I now hear what many phonostages “add” to the sonics after experiencing the Pyxi as far as distortion and coloration are concerned and I am no longer going to participate in this approach,  and the main reason is my pocketbook.  I believe I’ve spent money chasing what was clearly my phonostage coloration and smearing of my sound system.  The Pyxi can bring you the detail without coloration, or smearing of the soundstage and for an incredible price point that just can not be beat.

We use US based manufacturing for everything board related on the Pyxi.  The extrusion is the only thing that is not made in the United States.  This is Sota’s first foray back into the phonostage market and we are happy with the end results.

We will be shipping shortly as we are doing final QC procedures and assembly now.  More technical information will be on our web page shortly, with owners manuals and setting information.  For those interested, we were running at 47k at the Capital Audio Fest with the Grado cartridge on the Sota Quasar turntable.

I would like to say thank you to everyone that helped in the listening tests.  These listening sessions were a labor of love for many, but do take time.

Your feedback was invaluable and we appreciate the support.

PS: Here’s some of the final Prototype pictures. 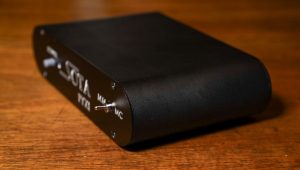 For all non-SOTA turntables please review the motor size PDF below, and read owners manual to check compatibility. Will work with many VPI turntables. If not technically minded please work...
Read More